There are lots and lots of sights to see, things to do, places to visit and gigs to go to around London. Just look at the tourist guides and websites and all the listings in the newspapers and 'Time Out' (THE esential guide to what's on in London).

In LONDON SIGHTSEEING we give you links to many of London's best tourist venues.

But what you're less likely to know about are all the amenities, bars, pubs, restaurants and things of interest around Queen's Prak. So here are a few to whet your appetite.

To the East along Salusbury Road there are many excellent restaurants

To the East on Salisbury Road (near Queens Park Underground Station) there are these restaurants and cafés:
• Trendy, good grub: Alice House (Trip Advisor) 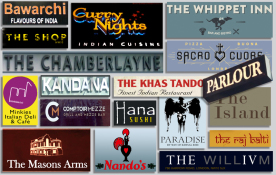 West on Chamberlayne Road and Kensal Rise - even more restaurants

On Chamberlayne Road and Kensal Rise there are more restaurants and pubs.

• A weird cocktail bar with nibbles The shop (Trip Advisor)

But this one caps them all - a really, trendy fine-food pub with a Michelin trained chef and entertainment and queues: - MUST book: • Paradise by way of Kensal Rise  (Trip Advisor)

Within 10 mins taxi/bus ride we even have 3 Michelin starred restaurants, if that’s your style and budget.

London is of course famous for its two main Opera Houses, Covent Garden and the English National Opera, its West End theatres, its many cinemas and for grand film premiéres at Leicester Square Odeon.

What you may not know about are the many "fringe theatres" around town where experimental and pre-West End productions can be seen. Our nearest is "the Kiln" (in its glory days, "the Tricycle") 20 minutes walk away in Kilburn.﻿

And you might not know about the four historical cinemas near to us in Queen's Park.﻿

The Electric, Portobello Road opened in February 1911. The original building was completely restored at huge cost in 2001. Key to its relaunch were hi-tech features like the ingenious expanding wide-screen which comes through the original heritage protected proscenium arch. Seating was reduced to 98 leather armchairs keeping the tradition of two-seater sofas at the rear.
Alongside the cinema is the Electric Brasserie. This is real history and a joy to visit.

The Gate, Notting Hill Gate dates from 1865 and was completely restored in 1985, when the ornate Edwardian plasterwork was repaired. There were more upgrades in 2004 with air conditioning, velvet armchair seating and double "love seats". There’s a bar in the lobby selling wines which may be taken inside. We remeber seeing "Moulin Rouge" there - it was difficult to see where the cineam ended and the film began.

The Coronet, Notting Hill Gate opened in 1898. as one of the largest theatres outside the West End. Made famous when Julia Roberts and Hugh Grant filmed a scene there for the movie "Notting Hill". There are 3 tiers of seats - stall,  circle (recommended) and gallery. In need of much refurbishment this cinema still oozes eery old charm.
We remeber seeing "The Artist" there - perfect ambience for the 'silent' French movie.

The Lexi, Kensal Rise - The UK’s first social enterprise independent boutique digital cinema – that ticks quite a few boxes, eh? 100% of the profits go to a charity and it's staffed by passionate, local volunteers. It's a perefect little gem and has a wine bar open throughout, about 60 comfy seats and a few tables. It's only 10 minutes walk and we go there often. 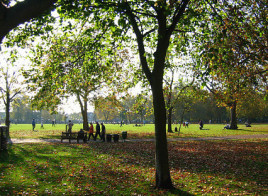 Park. The 30 acre park in the heart of Queen's Park is owned and beautifully maintained by the wealthy corporation of the City of London. It boasts a 9 hole pitch-and-putt golf course, 1st class tennis courts, outdoor table tennis tables, a petanque piste, a splendid Victorian bandstand, a petting zoo, a café, a children's playground, a paddling pool﻿ (in summer), an adventure park, even a secluded quiet area with flower beds, shrubs and benches for the enjoyment of 'older folk'.

On a fine day it is an enormously popular space for picnics, sunbathing, jogging, kicking a ball about or chucking a frisbee. 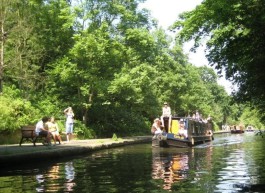 Walk through London along canal paths

Canals. A great but different way to see London. Take a walk along an old canal towpath. The nearest place from here is just along the way at the top end of Ladbroke Grove - a ten minute walk. Here, there's a walk along the Grand Union Canal to "Little Venice" and on to The Regent's Canal which runs right through to Limehouse and the Thames, well away from the usual tourist hotspots. But you pass through Regent's Park, near by London Zoo and onto Camden Lock and further. On the way you'll see a different London, from multi-million pound villas to rundown council estates, from gasworks to hi-tech offices, from mosques to markets - all London life is here﻿﻿.
Various companies also offer barges 'cruises' along the canals, for example from 'Little Venice" near Warwick Avenue to Camden Lock. Try Jasons Canal Boat Trips 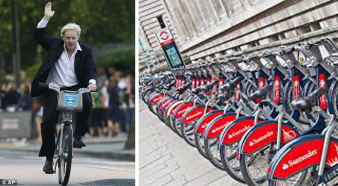 EX-Mayor Boris and his many bicycles

Bikes. That's Bojo Boris, ex Mayor of London, ex Foreign Secretary and now, amazingly to bothe left aand right actually Prime Minister. Those bikes were first called "Boris's Bikes". They're for hire all over London. They're red and sponsored by Santander and the Mayor is now Seddiq Khan. Other branded bikes are also for hire.

You have to be careful cycling round London - it wasn't built with bikes in mind. But if you're an experienced urban cyclist it's a good way to get around town, but take care and remember to cycle on the LEFT and to be extra careful turning RIGHT.